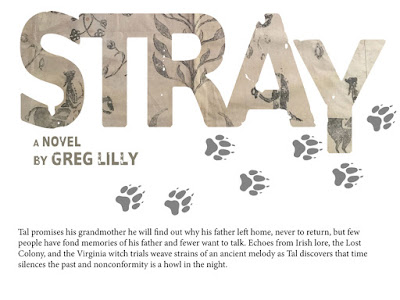 My new novel tells the story of a long-time Washington County, Virginia family and the disappearance of the seventh son thirty years ago.

The story developed as I thought about my own family and the dynamics between my father and my uncles and grandfather. In the book, Taliesin MacGuire promises his grandmother he will discover why his father left thirty years ago and never returned to his family. Time is the enemy in this tale. Time erases memories and paper trails of daily lives.

I incorporate Scots-Irish legends in the names of the characters, which shadow the characters’ personalities. Along with the old-country lore, I have a trace of very early American history. Subplots emerge from the Lost Colony of Roanoke Island in 1587 and the Virginia witch trials of early the 1700s.

This is the most personal book I’ve written. Our own family legend was the day my father moved out – his first step toward the eventual divorce. He disappeared. That stays with a 13-year-old son. I knew this story would emerge in my writing at some point.

Settings are very important in my writing. This story focuses on Virginia with locations like Bristol and Abingdon, along with Charlottesville, Richmond, Williamsburg, and the North Carolina Outer Banks. These are places I love. I have lived in these locations or have attachments there. I set my stories in real places and let the characters reflect the sense of place and time.

The story’s fictional family resides between Bristol and Abingdon with the main characters showing up in locations all around the area. At the Bristol Public Library in April 2011, I held a book signing for a previous novel and moderated a discussion on how to use setting as a character. Those notes sparked the sense of place in STRAY.

You’ll never meet a more intriguing cast of characters: seven sons twice over, a probing, sexually-fluid musician, a persistent grandmother, a seer, an uncommon doctor, a womanizer and the women he leaves behind. Add to that an accused witch, a half-breed and a hero by the name of Thistle.  Stray takes you from the hills of Virginia to the Outer Banks of North Carolina, masterfully back and forth through time—all in search of solving a decades-old mystery with scant clues and no remains to be found.
- Sally Stiles, author of Plunge!